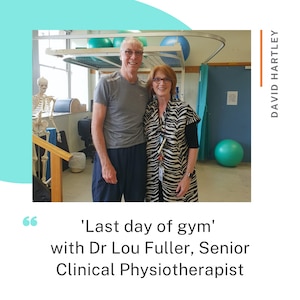 After 15 sessions of physio David’s fitness is returning

My name is David Hartley, I am nearly 65 years old and had a single lung transplant early this year at the Alfred Hospital.

I had a single lung transplant simply because my diaphragm had become stuck to the left lung and the surgeons were concerned that my chest cavity would be open too long to survive a double lung transplant as well as repair the diaphragm.

My beautiful wife Mary is my Carer on this journey and we have three very supportive children, Christopher is 35 and lives in London with his fiancé Sarah. They became parents to Charlie David in January. Lauren is 32 and lives in Townsville and Alexander is 30, married to Hannah and lives in Adelaide.

I was raised in Yorkshire by my wonderful parents, graduated as a Civil Engineer in 1976, met Mary and we married in 1979 before emigrating to Adelaide in 1982 as a Design Engineer for a global company. Except for a 2 year period, I was with this company until 2017 when I retired as the Engineering Director. From around 1994 I established and was responsible for Engineering Offices in 9 Asian countries as well as being responsible for 7 then existing Engineering offices. My role required me to visit each of these offices at least twice a year, so there was a lot of flying.

I have always been active. At school I played most sports – soccer, rugby, cross country, basketball, swimming to name a few. At University I, continued most of these activities. Throughout most of my time in Adelaide I regularly jogged and played other sports socially. In the last 10 years I changed to road cycling, walking and swimming to reduce the impact on my knees. I cycled at least 25kms three times during the working week and on Sunday at least 50kms into the Adelaide Hills. I also participated in quite a few community cycles of between 100 & 150+kms (Tour Down Under Community ride). I considered myself to be extremely fit for my age.

I never smoked or participated in any substance abuse. My parents did smoke for a while during my time at home and I endured passive smoking at work, and in pubs & clubs. I worked as an Engineer on a major tunnel project, so I was exposed to some sandstone dust for about 12 months. I would also have come in contact with asbestos during my 5 years in construction in the UK.

In late 2014 I was in the UK on holiday and contracted a severe cough which I did not get treated for. The cough persisted and I eventually went to the GP, who subsequently referred me to a Lung Specialist. I had a biopsy in late 2015 which showed that I had contracted Idiopathic Pulmonary Fibrosis (IPF) – the cause could not be identified. The effects of secondary smoking, asbestos, silicosis and other such causes were all eliminated. At the time I was not too upset at the prospects as I was still fit enough to fully participate in all my activities – primarily I was told because I was exceptionally fit. Eventually I started noticing that I was having to work harder and eventually I realised that I had started to avoid some of the more strenuous sections of my rides, opting to take a flatter route instead. By late 2016 my regular spirometry results were becoming noticeably lower and I was becoming very much conscious that it was affecting me at work. This was partly the reason why I retired at the end of March 2017.

In mid 2017 the drug Nintedanib was approved for the PBS, so I started to take that with the hope that it would curtail the progress of the disease. It also had significant side effects – diarrhoea , exacerbated weight loss, and it caused me to be gluten intolerant. My normal weight was 90-95 kgs (I was 6’ 4” tall) when this all started and I started to lose about 1kg per month from late 2016. The side effects were therefore a major concern. I persisted with the Nintedanib through to late 2018 when on holiday in Europe I just got so fearful of going too far away from a toilet that I stopped taking it. By then I was easily getting tired and had great difficulty walking, even a gradual incline. I also was spending an unusually large amount of time sleeping.

Thankfully, we returned to Adelaide in early September without incident and I immediately saw my Lung Specialist. I was then referred to the Adelaide based lung transplant team who arranged for me to see the Melbourne team when they visited in late October 2018. By the time I saw them I was beginning to seriously struggle walking and at that meeting I was placed on oxygen. An inconvenience but also a godsend. Throughout November and early December I underwent a mass of tests to establish whether I was fit and healthy enough to get on the active list – and thankfully I was accepted to go on this list early  in 2019.

From November 2018 my condition deteriorated quite rapidly. I soon became fully dependent on oxygen – requiring 4 litres / hour most of the time – even whilst sitting. My appetite had gone completely – much to my wife’s frustration. I eventually had to have most of my foods liquidised just to get some nutrition and I was also taking high protein drinks. My weight had dropped to 65kgs – dangerously close to being too low to survive a lung transplant. I spent most of my time in bed or in my chair moving only to go to the toilet- which was a massive and exhausting task in itself. I visited hospital regularly -being taken there by my wife, always on oxygen and always in a wheelchair. I was so frustrated by my condition at that time. To see my wife struggling with chores that I would normally do, and to rely on Alex to come over to maintain the pool and garden really upset me, but there was just no possibility of me being able to do any of it – although I sometimes foolishly tried! 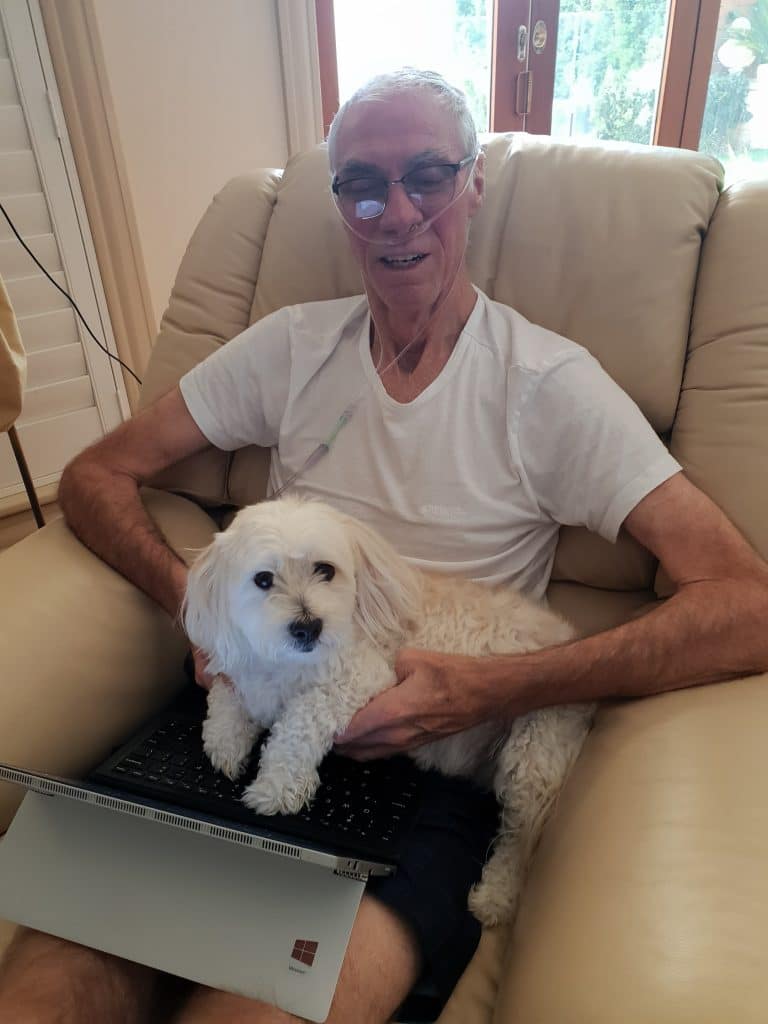 Mary received ‘The Call’ from the Alfred Lung Coordinator just after midnight and she came into my bedroom with the news. Surprisingly I was quite calm about the news and just dressed and waited for the ambulance to transfer us both to the RFDS at Adelaide airport. The flight across to Essendon was quite surreal and the transfer from there to the Alfred by ambulance was very bumpy! After a relatively short wait in the ward I was transferred to theatre late morning. I was surprisingly  calm – probably being the pragmatist that I am helped. Mary was naturally most worried – probably being a nurse in theatre and on the wards in her earlier days made her much more concerned than most carers who do not understand the potential problems??

I woke in ICU to see Mary, Lauren, Alex & Hannah. Understandably it was quite an emotional time for them – I was probably too drugged up to be the same. I was comforted by seeing the kids as they would be valuable support to Mary during this stressful time. They left late that afternoon and I had my first solid meal for weeks – tea. Surprisingly I enjoyed it – but it came at a cost. A few hours later I woke with severe pain in my gut and called the nurse, who immediately called the doctor. On examination he suspected a twisted bowel which if not addressed could lead to it exploding & potentially being fatal.

The family was called in just before midnight and advised that I had to undergo emergency surgery which occurred early Monday morning. I had a section of the large bowel removed & a stoma installed. An Ileostomy. When I woke up in ICU all I remember are the hallucinations. I could not discern what was real and what was not. At one point I remember saying to myself ‘so this is what dying is like’. At some point when I was drifting in and out of consciousness I had conversations with friends & colleagues, stopping the discussion when I briefly woke, but resuming where I left off as soon as I passed out. Alex & Hannah unfortunately had to leave for Adelaide very shortly afterwards, but they had been of invaluable help to Mary. Between them they arranged the accommodation for when I was eventually strong enough to be discharged – a massive help in itself, never mind the physical and emotional support that they brought.

Lauren, my daughter left for Townsville a week later, leaving Mary alone and quite vulnerable and I was quite concerned for her health, but she continued to visit every day. Thankfully, my progress was steadily forward, most days a drip or a drain would be removed and I gradually regained my appetite and became more talkative. I also started to look after my stoma – which for me was more of an issue.

My weight had dropped to 63kgs, so I did not have much muscle, however it surprised me to find that at my first physio I could not even stand up. I was quite devastated. I cannot praise enough all those that helped my recovery to date. The various doctors and their support staff were excellent and were never too busy to provide answers to the many questions that we asked. The nursing staff were angels throughout – and were never phased when confronted with servicing my stoma, or worse. 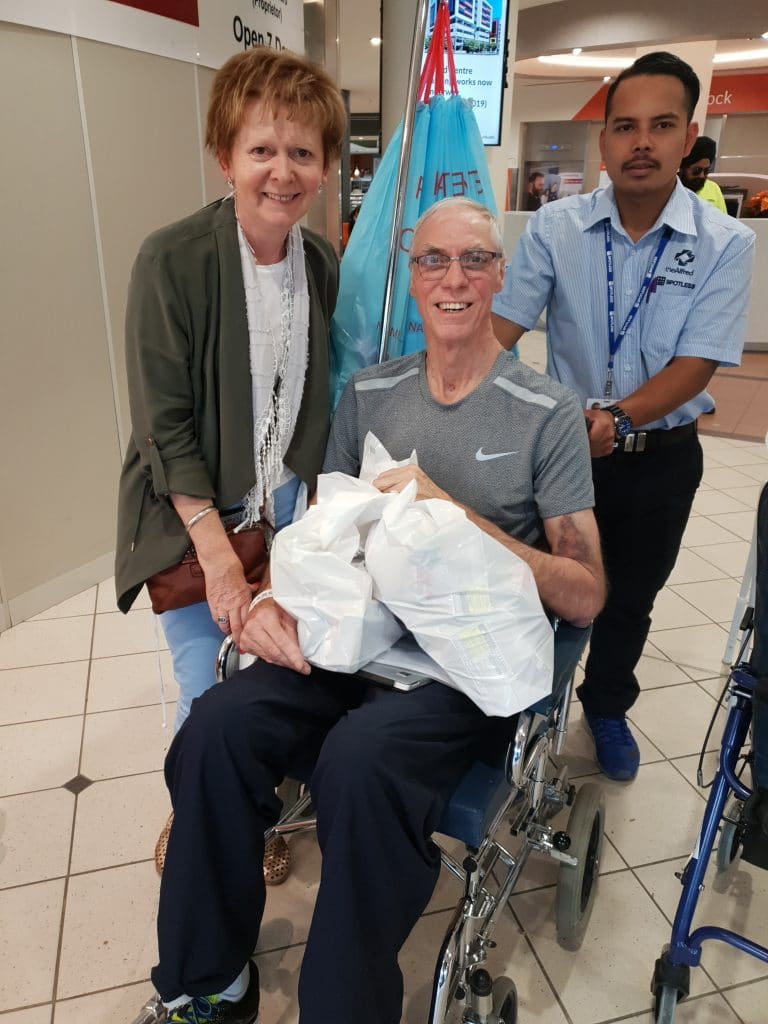 It wasn’t long before I was moved to Quest Apartments on St Kilda Road, about 700m from the Alfred, and a short walk to the beautiful Fawkner Park. Importantly it is light and airy and has a great outlook over St Kilda Road. Since moving to the apartment, my progress has continued to be steady. I have increased my weight & started to gain strength as a result of my diet, the physio, which I enjoy, and the walks in Fawkner Park with my wife that I do in between times. In the 2+ weeks I have been able to get rid of the walking frame and at the time of writing, can with moderate effort, walk for more than 20 minutes relatively confidently. I only hope that I continue to progress positively but realise that I still have a massive amount of work to do.

I want to mention again the role of the carer – it cannot go without noting the hardship, heartache and physical as well as emotional stress that they must go through. I firmly believe that I truly have had the easier life since this all started. I only hope that if I am placed in a similar situation I will be equal to the task.

My goals now are to return to my home in Adelaide as soon as is humanly possible, and also to be strong enough to undergo the reversal of the stoma, if that is deemed possible. We also have our grandson to see before he gets too much older!!

Your ticket for the: David Hartley