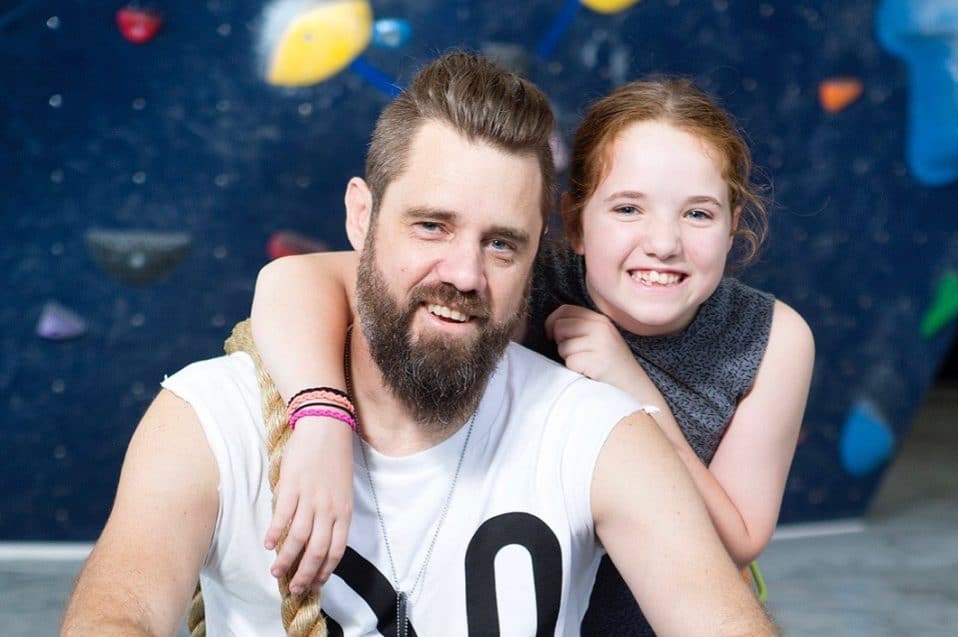 I received a lung transplant in late 2017 and now have the opportunity to spend more time with my beautiful daughter named Catherine who is my motivation to wake up each day. In recognition of the inspirational guidance and support I received from Dr Louise Fuller and The Alfred’s Lung Transplant Physiotherapists, I am fundraising to replace and update the transplant gym facilities and equipment.

I am a transplant patient that had my operation in late December 2017. So I’m new to everything that is post transplant. It’s been a wild ride and something that I would and could never have planned myself for.

Just a bit about my background. I have Cystic fibrosis and am 40 years old. I have been managed at The Alfred hospital for 21 years now. I feel like part of the furniture here. I have grown up as a kid on the coast surfing and skateboarding. Then rock climbing, snowboarding and now skiing, since my daughter is now at ski school at Mt Hotham. I used to do modelling and acting work in my 20’s and early thirties. I have stunts on every Melbourne based television show, movie and television commercials. I met my idol Tom Cruise and Katie Holmes while working with Katie Holmes in Melbourne. I’ve work bars and nightclubs. Then banking and finance. I went to the gym regularly in my 20’s and not so much in my 30’s.

I started businesses and worked hard with my wife to build incomes and then more businesses. I have 4 businesses now and 3 more starting very quickly. I have around 30 staff and offices here, Melbourne regional and also Overseas.

I had the beautiful joy of having a daughter named Catherine who is my motivation to wake up each day.

I have had a slow decline of health to the point where my acceptance of each stage of decline was second nature. I got used to being sick and then less sick. Which to nearing the end where a few quick bouts of Influenza B and A over two different times on two year in a row was the nail in the so called coffin for me. I never bounced back. I could see everything I loved about the outdoors running around all day and all night slowing and slowing down so slowly it hurt. I knew I was never going to get those opportunities back. I fought the illness every step of the way. Each admission and each flu, cold, flare up I was right there with the anger and frustration that this was not going to beat me either mind or body.

I used to go up to Mt Hotham and take oxygen on my back pack and park in the disabled spot opposite the summit lift chair. My wife would carry my skis and poles across the road and I would walk slowly across. Then catch my breath and put on my skis and helmet. My wife would dial up the oxygen. I’d look up at the mountain and thought to myself “you’re not going to beat me today”. I’d be skiing the snowboard park and rail sliding to the point where my nearly had multiple breathlessness attacks due to lack of oxygen. I could only ski a handful of runs each day.

It was when I was struggling to breathe at sea level I had to pull the pin as I couldn’t manage to fake it to anyone or myself anymore. I listed for a transplant and after two false starts I was given new lungs.

This is where I bumped in to Dr Louise Fuller my physio. I was in A/P Glen Westall’s office having one of my first outpatient appointments and I said to Glen this bounce in my body is getting bigger. He took me straight to see Louise. I sat on the bed and she looked me over. It was apparent to her and Glen that I had a few problem with my body. My abdomen and shoulders. Louise looked at me for 10 seconds and as I sat on the bed she began arranging my body head and back in to a new position. It was the perfect posture (minus the big stomach and hunched shoulders). We took a photo side on so I could see what I needed to look like. It made me emotional and I nearly cried. Louise had in less than 10 seconds diagnosed my problem and way to fix it. Both now and ongoing.

I have now been correcting with her guidance and treatment both posture and fitness in the gym. I have been to gyms and have never been to such a great positive and supportive atmosphere than there. Louise, Vedad, Megan, Sarah and the others have all made it very warming. The other physios and students all look up to Louise. My posture was bad and I used to lose modelling jobs because of it. Now it is looking so much better that my confidence because of Louise has been inspiring. I have had bad posture for over 29 years and have not been able to fix it. It wasn’t until I met Louise that this was fixed. I only wish I had met her 20 years ago.

I would like to acknowledge Dr Louise Fuller for the Transplant Physiotherapy program at The Alfred hospital and for all of her tireless effort and hours spent raising money for further development of the gym and its resources.  I will never forget her and the experience and warmness and smiles she created in the gym. On behalf of every one that has had a transplant both alive and dead I am thanking her through you. This is a vital service and does need upgrading every now and again.

The facilities and gym equipment is old and needs replacing. There is new technology to make it easier for the physiotherapist to collect the data from the patients routines. As this division of the Alfred Hospital keeps growing there needs to be growth in this post surgery area.

We improve survival rates and outcomes for lung transplant recipients & their carers.

Your ticket for the: Climbing the Transplant Peak